For the last year and a half Margaret and I have volunteered our time to a program titled Teen Spirit which was conceived and is executed by long-time Atlanta photographer Corinne Adams.  The quick description is as follows; once a month Corinne and a couple volunteers go to Scottish Rite and Egleston hospitals to teach teen patients about portrait photography.  She then sets up a portable studio including lighting, backdrop, props and camera and the teens take turns either as photographer or subject.  After each teen has had a turn one print is made of each subject who then writes something about themselves.  After several months the printed portraits and writings are organized into a gallery show displayed in October in conjunction with Atlanta Celebrates Photography (ACP), a co-sponsor of the Teen Spirit project.  This year the photographs will be in several locations as pop-up exhibits.

Below is an excellent article written by Maura Friedman and published in Creative Loafing.  It has been an honor to work with Corinne, and it has been humbling to work with these amazing teens whose lives are put on hold while hospitalized. Below is a photo from the pop-up exhibit.  For a schedule of the pop-ups see the ACP Festival Guide. 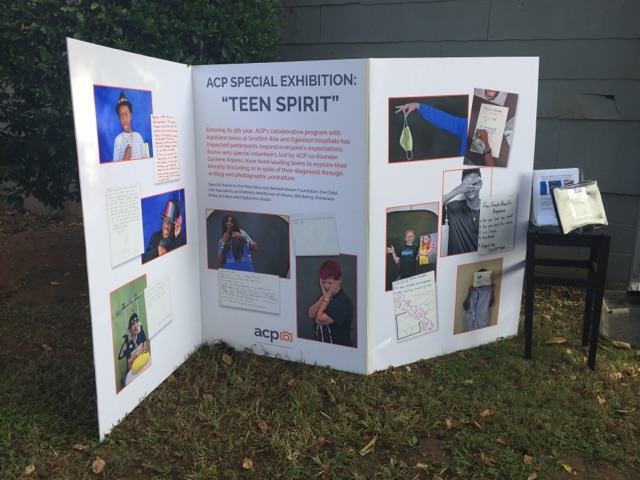 Once a month, the kids file in. Some are in wheelchairs, some are pushed in rolling beds. Most wear patterned hospital gowns.

“Hey, do you take pictures?” Corinne Adams, a cofounder of Atlanta Celebrates Photography and a fine photography artist, asks, starting the workshop. Inevitably the attendees nod their heads. These are teens, after all — they know their selfie angles.

For five years Atlanta Celebrates Photography has run Teen Spirit, a portrait workshop for teenage aged inpatients at Scottish Rite and Egleston hospitals aimed at exploring identity. And for the fourth year, the images those teens have made will be on display in pop up galleries as part of the 18th Annual Atlanta Celebrates Photography Festival, a month-long event of galleries and talks.

Hospitals have long had activities in place for their youngest patients — face painting, clowns, magic — but there’s very little entertainment available for marooned teens, save for self-mandated scrolling through Snapchat or Instagram on their phones. Because this online world centers heavily around image consumption, teens are already presumably familiar with basic smartphone photo editing software. This program takes that knowledge base and pushes these young patients into the more artsy realm.

She uses selfies as an entry point but explains portrait photography is different because it involves collaboration to create expression. And it doesn’t just have to be of your face — a portrait could be of your feet or your medical equipment.

Adams asks the kids what they want to say about themselves.

Two young people at a time step up to their makeshift studio — one backdrop and two lights arranged in a hospital office — plugging and unplugging themselves into infusion poles as they move in front of and behind the camera. Press the button when you’re feeling something, Adams tells them.

“I describe it as taking a selfie times 100,” Demetrius Bolston, a now 20-year-old cancer survivor who has been attending the photo workshops since 2014, says.

That “times 100″ that elevates pictures to portraits shows in the final frame. The moment a young girl’s chin turns up with her smile, hip popped like she’s at a block party. The boy staring intently into the camera over his surgical mask, hands clasped as if he’s already made his point. But many of the 2016 pictures also have a polished aesthetic quality — a girl with her hand suspended over her chest as she stares absently off camera; Demetrius gazing directly into the camera through parted fingers, his infusion tubes dangling parallel to the chain around his neck. These images embody self possession — personal agency represented visually.

He borrowed Adams’ jacket to cover his hospital gown that day. Other patients bring props — once a girl brought a feather boa to wrap her infusion pole. In these portraits, the teens see themselves as they want to be, which often has nothing to do with their health status.

One cancer patient in a recent workshop was particularly nervous. Her bald head made her self-conscious about modeling. Demetrius coached her gently, taking photos of her hands and the details of her socks until she relaxed to take a more traditional portrait.

It’s that personal empowerment that gives the whole project meaning to Adams.

“I’m at an age where if I have another photography show it’s not going to change the world,” Adams, a 25-year fine art photography veteran, says. “I want to do something that really takes photography into the world in a meaningful way and has impact and relationship involved in it.”

Demetrius’ favorite filter for his photos is black and white. He says the added drama fits his personality. These days he always volunteers to model first as a way to break the ice for patients new to the photo workshop. Initially, most meetings are stiff. What’s this going to be like? And how will I do?

By the time the third or fourth teen poses, Demetrius says the group tends to get rowdy and more fun. The collective exhale of inhibitions gives way to creativity (“raise your arms like this, try this angle”) and a collaborative bond (“let’s all take a group photo now”).

Demetrius has yet to see his portrait work hanging in the Teen Spirit gallery. He’s always been hospitalized during the shows, but the hospital did arrange to display some of his images on site.

When Demetrius looks at his portraits, he can see his confidence reflected back at him through his own eyes. He wants to hold onto that feeling. He says he wants to be a professional model someday. And at the next Teen Spirit workshop, he’ll ask another patient to take his headshots.

This site uses Akismet to reduce spam. Learn how your comment data is processed.