It’s July And We All Know What That Means, Don’t ‘We’?

Well I do!  It’s the one month in the year I’m glued to the television taking in the four to five hours of Tour de France coverage.  Yes, four to five hours a day of the greatest sporting event in the world…life can’t get much better.  Each ‘stage’ of the twenty one day event takes several hours to complete as the cyclists ride in excess of a hundred miles a day, sometimes over the high mountains of the Alps and Pyrenees. The usual comparison to other endurance competitions is that of running a marathon a day for twenty one days in a row….that would be unheard of.  Many of the athletes who compete in the ‘Tour’ (as it’s called by those who follow it) don’t look like athletes at all, more like anorexic bean poles barely able to walk up a flight of stairs.  But don’t let their twig-like appearance deceive you; these guys have unreal power and more stamina than any other athletes in the world.  On one stage of the Tour it’s not unusual for the cyclists to burn in excess of 10,000 calories, and though they consume huge quantities of food most wind up losing weight during the three week event. 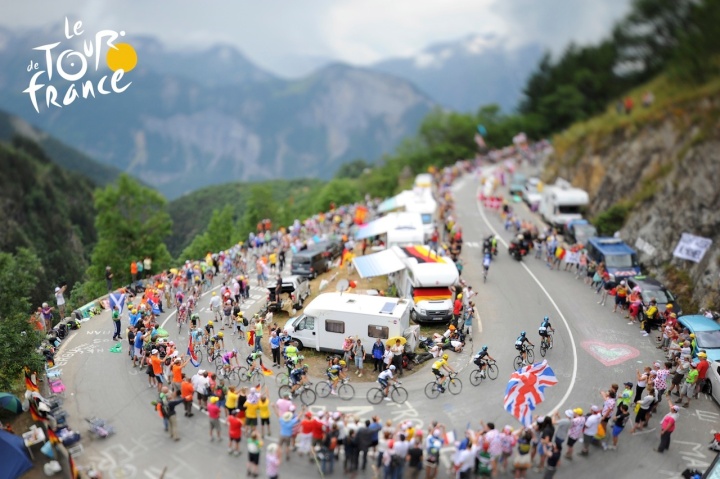 Athleticism aside, what makes the Tour even more amazing is that it’s attended by more spectators than any other sporting event in the world…..and it’s free to attend.  Some travel miles and miles, over oceans, to view mountain stages while some spectators walk out their front door as the Tour passes through their town or village.  The spectacle preceding the cyclists is similar to a rolling circus.  Many spectators dress like Americans on Halloween on the off chance they’ll get their five seconds of TV time.  On the big mountain stages fans camp out for days before the race buzzes by, a multi-day party waiting for a few seconds to see these amazing athletes.

But it’s not just the French that come out to view the Tour; fans from all over the world travel to France to see this amazing event.  And you know what….everyone gets along.  The Belgians (some of the most enthusiastic fans) get along with the French, and the French welcome the Americans, and the fans from Eastern Europe share a drink with fans from South America….and on and on.  Yes, there’s a shared interest, but more than that the Tour de France is similar to the Olympics; countries that were once enemies, or still may be, put aside their politics and peacefully compete in an athletic endeavor.

It’s in this spirit that makes the most recent terrorist attack in Nice, France that much more disturbing.  Amid the international background of the Tour this terrorist attack seems that much more unreal.  How do a group of people get to such a desperate place in their evolvement that they view the rest of the world as ‘the enemy’?  Why do holiday celebrants in Nice pose a threat to the daily lives of radical militants from ISIL?  How does a country of individuals let themselves be influenced by a government of terrorists and butchers?  We shouldn’t be surprised; it happened in Germany last century as it has happened before and no doubt will happen again, as is it now.

It’s so difficult to comprehend getting to a place in one’s life that blowing yourself up in an attempt to kill others is your best life option.  But that’s what happens when your life choices have become so limited.  Lack of education, food, medical care, equal rights and most importantly self esteem make people carry out unimaginable acts.  As we sit in our comfortable homes secure that even in the worst of circumstances we will be taken care of by family, friends or our government, those who don’t have that comfort become susceptible to powers who offer basic human needs to promote their ideology.

I have no answers.  So in the midst of all the terrorism these past years I take comfort that the world’s biggest sporting event has continued unchanged for over a hundred years.  Athletes show up and compete.  Fans show up and cheer.  People all over the world turn on their televisions to watch.  People have a shared interest and get along.  But evil powers still take advantage of the weak….when will the tide turn?

This site uses Akismet to reduce spam. Learn how your comment data is processed.